On 18 July, the Resolution Foundation launched the Intergenerational Commission to explore the questions of intergenerational fairness. The Commission brings together leaders from business, academia and policy-making to devise a means of repairing the social contract between the generations: Latest generation (born 2001-2015), Millennials (born 1981-2000), Generation X (1966-1980), Baby Boomers (born 1946-1965), Silent Generation (born 1926-1945).

With home ownership and wages plummeting for the young and those entering the labour force during the turbulent years of the recession, it is no surprise that issues surrounding intergenerational fairness are rising on the agenda of policy makers and the population at large. The Commission launched an 18-month investigation into fairness between generations chaired by David Willetts to consider how government, business and wider society can fix the contract between generations that underpins our society.

The Commission’s launch gave five commissioners an opportunity to speak from their expertise about the challenges between the generations:

David Willetts, Executive Chair of the Resolution Foundation, went through his journey from authoring a book about the need for intergenerational contract, to launching the Intergenerational Commission’s new report today.

Torsten Bell, Director of the Resolution Foundation Chair, began the discussion with why the intergenerational contract is under threat.

There has been a clear difference in the effect of the recession on real hourly pay by age, with the youngest hit the hardest. 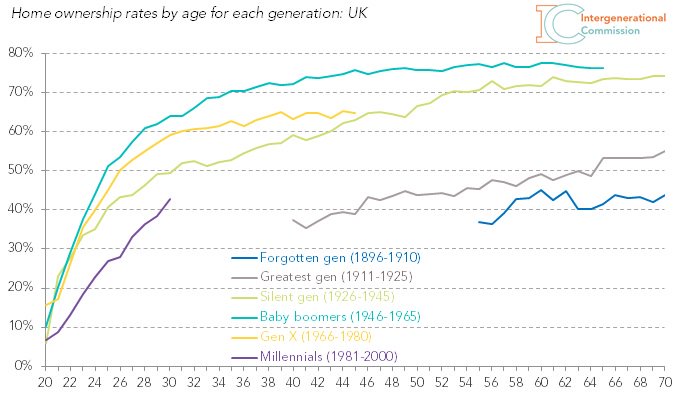 Home ownership has risen with every generation, but has fallen with Generation X and further with Millennials.

Torsten also considered how the current tax system, net of benefits, is redistributive from younger workers to the elderly, and that this is an issue HM Treasury should consider in its policy decisions. There is room to be optimistic however, as the Commission’s recent report shows there is rising support among all generations for local housebuilding, even when there are vast differences in how much each generation would benefit from such projects.

Carolyn Fairbairn, Director-General at the Confederation of British Industry, shone light on the private sector’s role in contributing to the intergenerational problems in three main areas:

Frances O’Grady, General Secretary of the Trade Union Congress, called for a stronger social contract between the generations by increased awareness of intergenerational stagnation that has been exacerbated by the recession, and an intergenerational fair deal through an active industrial strategy, focus on vocational qualifications, and extending a living wage to the under 25s.

Ben Page, Chief Executive of Ipsos MORI, displayed a figure showing a global anxiety and the UK showing a majority opinion that the next generation will be worse off than the last. He also drew attention to a survey showing that financial issues are the most common issues contributing to millennial worry, with work-related issues affecting 48% and housing issues 47%.

The Intergenerational Commission will seek to better understand the issues surrounding the intergenerational problem, and will set out changes to strengthen and renew the social contract between the generations. Ensuring a robust social contract will improve living standards, prepare Britain for future challenges, and ensure society is more moral and fairer in its attitudes between the generations.

The Commission’s launch report can be found here.